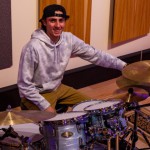 Inspired by his father, who is also a drummer, Paul started playing drums when he was 3 years old. In New York, where is from, he enrolled in private lessons shortly thereafter. As Paul got older he realized he wanted to pursue music as career. He moved to Atlanta at the end of 2018 to study at The Atlanta Institute of Music and Media. There Paul developed a close mentorship with the teachers and began substituting for them. After graduating from AIMM he started teaching private lessons, some classes at AIMM, and playing gigs on the weekends.